This is a slot that will introduce you to the heroine of all oceans and seas. Its theme, animation and the idea will draw almost anybody to try their luck and take a spin in this game. 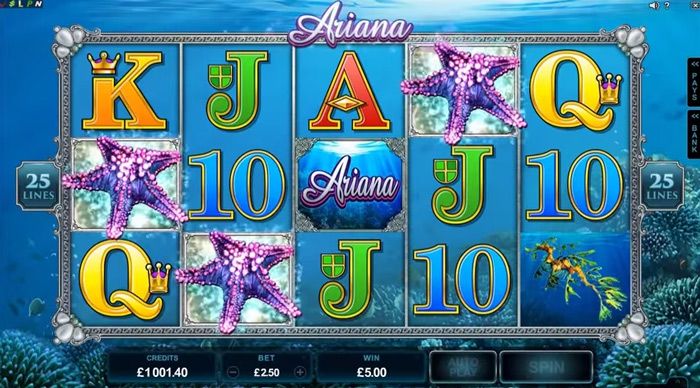 Also, there is a wild symbol (joker) that is formed as Ariana’s signature. It replaces all symbols in the game, except for the Scatter symbol.

In addition to all basic symbols A, K, Q, J, 10 we will search for the Sea Star, Treasure Chests and Sea Grass during the game, the most.

What does that bring in practice? In the old slots we got used to the fact that one symbol appears on one place in the reel, however, with this game, it is not so. All stated symbols can appear on two other places in the reel, it is even possible to fill the entire reel or pay line and when that happens in the first reel, they fill the complete reel on all places where the same symbol appears. 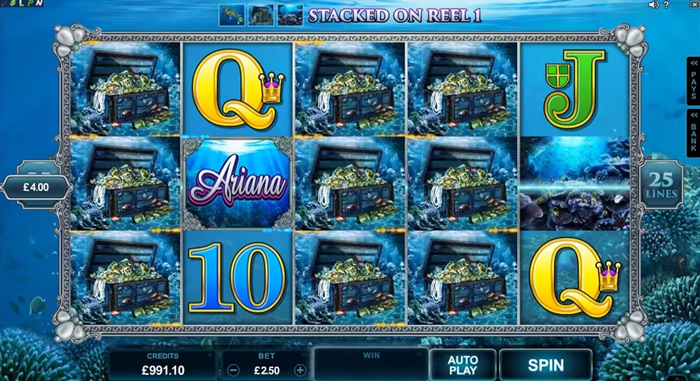 The example in the image shows the Stacked symbol in the form of the Treasure Chest in the first reel, wild symbol (joker) in the second followed by the two Treasure Chest symbols.

With the ‘help’ of the first reel all other symbols will fill other reels, like the second image shows. 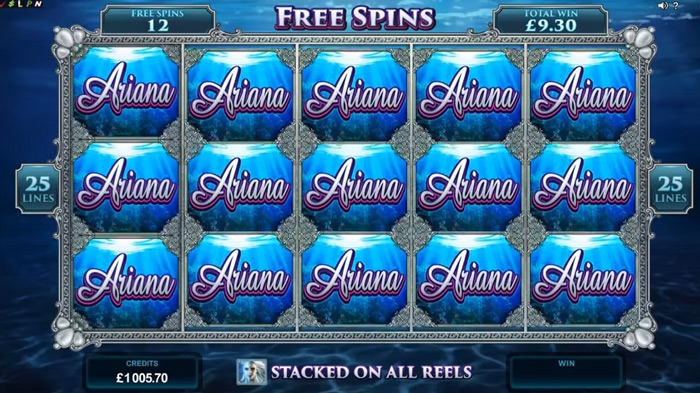 During the free spins, even the wild symbol is stacked in the first reel, that is, it is possible to fill the complete first reel with Jokers.

In practice, all of this leads to a great chance of multiple winnings, and big winnings, let's imagine only the Ariana symbol in the first reel, and another separate Ariana symbols in the 2nd, 3rd, 4th and 5th reel each. This practically means we will have a full screen of Ariana symbols, which, depending on the stakes, can lead to huge winnings, just like in the example shown in the picture.

Before reel filling in free spins:

In the second example, we see the expansion of the Ariana symbol in the 2nd, 3rd, 4th and 5th reel, resulting in a full screen of wild symbols and the biggest possible winnings.

Perfect animation, excellent graphics and relaxing sound, large chance to win big, great number of novelties when it comes to slots packed in one game, interesting features contribute to the best possible score for this slot. It may seem a little too complicated, but it is not. After a few spins, you will see the essence of the game and the possibility to win. It is worth the try, at least, learn using this explanation in the Demo version, and then spin and try your luck with real winnings.