This awesome game comes with a few random surprises up it’s sleeves, making the Rabbit in the Hat slot online a little unusual. The magical theme itself is one that you will be familiar with, the stage is set, the magician sits on the right hand side of the screen, the curtains are drawn and… magic!

In this game we will try to win as many points as possible, that is, get the biggest winnings from this slot using magic tricks and all Magician’s tools.

Depending on the number of symbols collected, the Magician, the Hostess as well, rabbits from the hat, magician’s bag and many other symbols related to this theme, that come in high numbers, compensate for a lower number of pay lines, 9 of them, in total.

The wild symbol in the game is the magician’s hat. However, it is just one surprise that awaits us during the game.

Namely, during the spins, constantly, above all 5 reels, from the right to the left, 4 hats with rabbits will spin, having different meanings.

When the hat in the reel matches the wild symbol (Joker) beneath it, the game is activated, that is, the points that the hat above the reel carries are won. 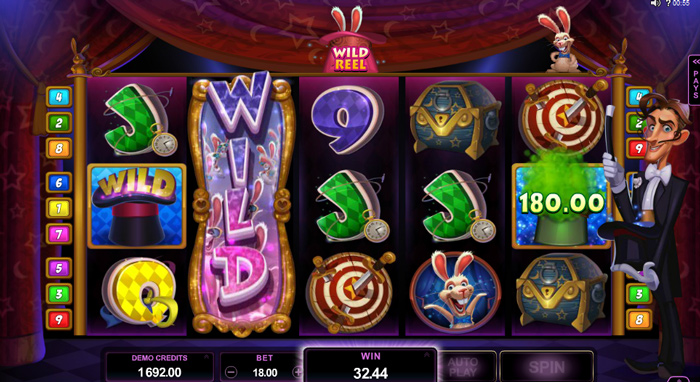 The Wild Reel hat fills the entire reel underneath itself with jokers.

The Cash hat generates awards in the form of points.

The Random hat, or the hat with the question mark, randomly selects one of these bonuses.

The second example shows it best, the Wild Reel symbol above the reel ‘matches’ with the Wild symbol in the reel and fills the reel with Jokers and wins points in the last reel.

As we have said at the beginning, even though this is a game with a smaller number of pay lines, it is all compensated with a larger number of symbols, a total of 13, not counting the 4 symbols that generate Bonus Games.

The animation is interesting and it will make you smile, but a good combination of Jokers will make it more serious, winning a bunch of points in one spin.

Want to try out this “magic” slot? Play now for real or for free!