In the series of games made according to movies, TV series, shows, books, even cartoons, there was no way one of the most famous TV series in the last couple of years could have been skipped, produced from the books named the same, the Game of Thrones. 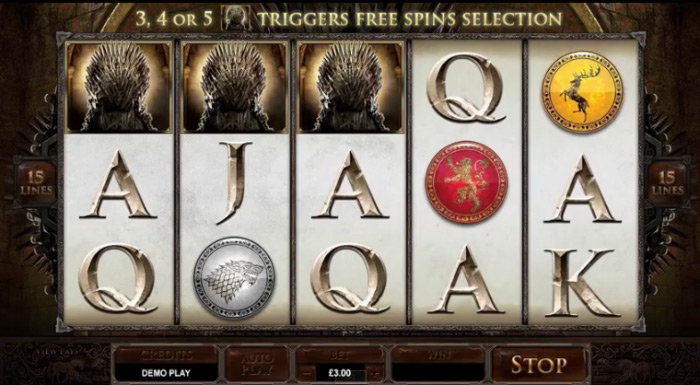 Anyone who saw at least one of the episodes of this TV show will understand many of the details of this game, and we will try to familiarize the others through these clarifications.

In this epic fantasy, the plot of the TV show, happening on the fictive continents Westeros and Essos, follows the events in several noble families fighting for the Iron Throne and the rule over Seven Kingdoms, while the winter is coming and strange and mystical creatures appear. 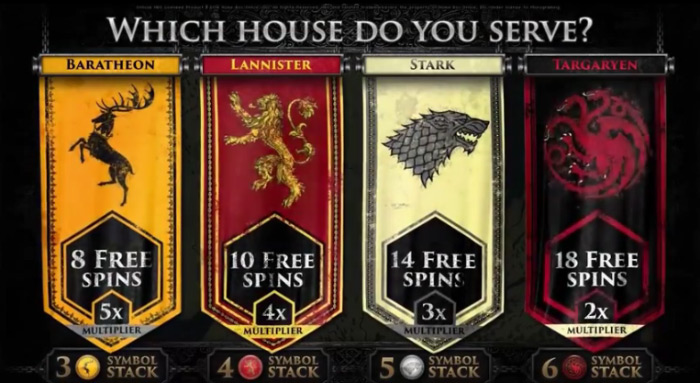 At the very beginning of the game we see a novelty. The selection of the payment method. Namely, you will select between the, let’s say, classic method of calculating winnings in the form of 15 pay lines, or the frequently mentioned and used 243 methods of calculating the winnings.

The new method, pairing of adjacent symbols or to put it more simply, winnings not related to the line, but related to the appearance of the same symbols at any positions in the reel, from left to right, is our recommendation for the start. Familiarization with the game in practice with prolonged period of playing and winning points is much easier in this way.

Stacked Wild symbol (Joker) replaces all symbols except for the Scatter symbol, but the most important thing with it is that it appears in every reel and in each of them it is possible to get one, two or three Wild symbols, or more simply, to fill the entire reel with Jokers. 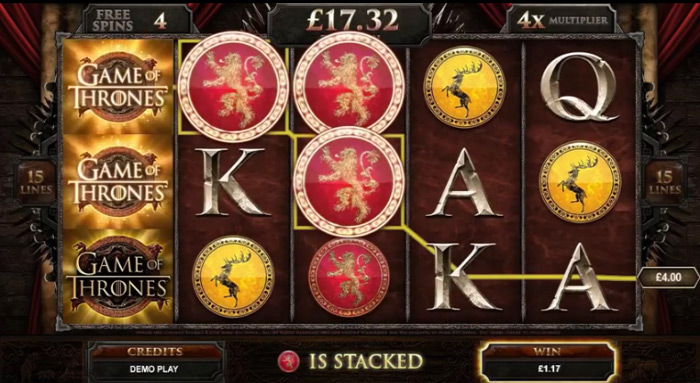 In the Bonus Game the player selects the right game it wishes to play. Namely, 4 banners of the houses of Baratheon, Lannister, Stark and Targaryen carry a different number of free spins and a different multiple winnings.

The selection of the Baratheon banner generates 8 free spins for the player and all winnings from them are multiplied by 5. Also, the yellow Baratheon shield is stacked, that is, it can appear during the free spins sometimes even in the entire reel which can generate the biggest winnings.

The Lannister banner generates 10 free spins and all the winnings from those spins are multiplied by 4 and the red Lannister shield is a stacked symbol (example in the image).

The Stark banner generates 14 free spins and multiplies all winnings by 3. The white shield is stacked in this bonus game.

The Targaryen banner generates 18 free spins and doubles all the winnings. Maroon shield of the house Targaryen is stacked in this bonus game.

Of course, as with many other spin games here it is also possible to win 3 Scatter symbols and win free spins again, that is, the Bonus Games.

You through this was the end of these great details in this game? Of course not… the Gamble option is a story for itself, and since a lot of players like it so much, it deserves a special chapter.

The game will simply make you try to double the number of points by the end of the game in a very interesting manner, more than other games can.

No picking higher or lower, no picking red or black. The pick is heads or tails and the epic coin spins. By guessing heads or tails you will observe a video taking you over two continents, Westeros and Essos that are the scene of the TV series, or the game.

There are games with a lower number of points, there are those with big winnings but it is harder to reach it. The Game of Thrones is in the middle, with the proper balance.

It may seem complicated, but, we have only paid attention to each detail in the game, and the details were produced magnificently, and all the methods of winning points, and there are a lot of them. Actually, the game is just like that, detailed and in many parts of the game, owing to an incredible animation, you will get the impression you are watching a cartoon. 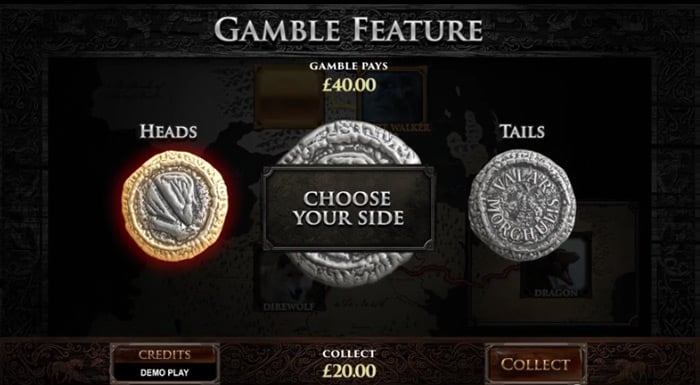 It will make you focus, turn on your imagination, it will draw your attention and the 243 ways to win points will make you play longer, and, the right combination of Scatter symbols can bring big winnings for you.

This will be of interest to many fans of games of chance that love this TV show, to spin and try the Game of Thrones, and again, through its great details, it might stimulate players that did not see the show to start watching a few episodes.

There are slots that bring more frequent, smaller winnings, while others, on the other hand, provide the possibility to win big, but rarely.

The dragons were always interesting for different types of slots due to their features.

One more slot themed after the water world.

If you desire a simple slot with animated characters from cartoons you are on the right spot.